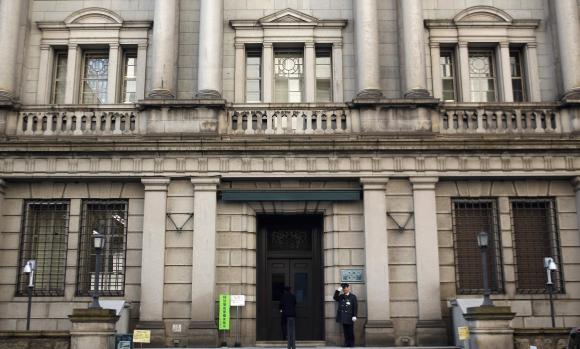 The Bank of Japan can wait for more data in the summer before it decides whether to ease policy further, a key aide to Prime Minister Shinzo Abe said, indicating the government is not pressing the central bank to immediately bolster the economy.

As the world’s third-biggest economy shows signs of slowing momentum ahead of an April 1 rise in the national sales tax, speculation has risen that the BOJ may need to ramp up its already massive purchases of bonds and other assets.

But Koichi Hamada, professor emeritus of economics at Yale University, told Reuters: “My position is rather optimistic that the Bank of Japan should examine the economy closely when economic data reflecting the tax hike come out.”

Major economic data showing the impact of the tax increase will begin to trickle out from June and July.

“It is uncertain how serious the negative effect of the sales tax hike will be on the economy,” Hamada, one of Abe’s economic advisers, said.

Central bank board member Yoshihisa Morimoto said on Thursday that the BOJ need not wait and react to economic data but could be proactive if its economic forecasts appeared to be in jeopardy.

After the April increase in the sale tax to 8 percent from 5 percent, Abe must decide whether to proceed with a planned second hike, to 10 percent. The decision on the October 2015 tax increase is expected late this year.

“Japan has to keep easy macroeconomic policies in order to help the jobless rate and the jobs-to-applicant ratio continue to improve,” Hamada said.

“In case the recovery in the jobs market stalls and the deflation gap persists, I will strongly object to the second sales tax hike.”

Japan’s economy grew much more slowly in the second half of 2013 than in the first half, when it was buoyed by the monetary and fiscal stimulus of “Abenomics.”

The nation’s jobless rate fell to a six-year low in December and the availability of jobs improved to a six-year high, suggesting a steady recovery in the labor market.

But many businesses are cautious about raising base wages, which is seen as vital to Abe’s hopes for sustained growth and to beating 15-year long deflation.

Last April, the BOJ launched an intense burst of stimulus and pledged it would accelerate inflation to 2 percent in about two years through aggressive asset purchases.

“BOJ Governor (Haruhiko) Kuroda has shown excellent ability in managing monetary policy, as it worked well past one year through foreign currency and stocks markets,” said Hamada, who sees quantitative easing remaining the main policy for the central bank.

He also said the government should cut its corporate tax rate, considered high by global standards, because not only foreign investors but also Japanese investors will not invest in Japan if the tax rate remains high.