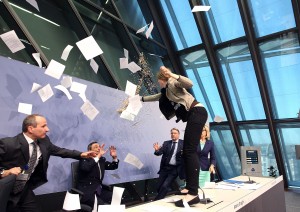 Mario Draghi claimed the first successes for his quantitative easing program, and played down concerns that the European Central Bank will struggle to implement it fully.

“There’s clear evidence that the monetary policy measures we’ve put in place are effective,” the ECB president said at a press conference in Frankfurt on Wednesday, after he and the Governing Council left interest rates unchanged. “We expect the economic recovery to broaden and strengthen gradually.”Data support Draghi’s view that Europe’s long-ailing economy is responding to the fresh round of stimulus launched last month, with gauges of activity and confidence pointing upwards as credit bounces back. The ECB president, who has pushed the central bank into unprecedented action to ward off deflation, said the measures will continue until September 2016 or until a “sustained adjustment” in inflation is seen.Draghi’s opening remarks at the press conference were interrupted briefly as a protester jumped on to the podium where he was delivering his remarks. The president was uninjured and resumed speaking shortly after. A spokesman said that the matter is being investigated and declined to comment further.The euro was broadly unchanged as Draghi spoke, trading at $1.0643 at 3:23 p.m. in Frankfurt. The Stoxx 600 index rose 0.7 percent to 414.55. 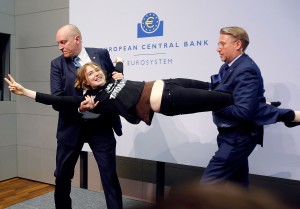 The ECB president pushed back at the idea that the program could fall victim to its own effectiveness and be cut short if inflation returns to target earlier than expected.

“I’m quite surprised frankly by the attention that the possible early exit of the program receives when we’ve been in this program for only a month,” Draghi said. He said that concerns that the ECB will struggle to find enough eligible debt to complete the program, as many securities increasingly display negative yields, are exaggerated.

German 10-year yields dropped to a record this week, along with those in five other euro-area nations, as the 1.1 trillion euro ($1.2 trillion) quantitative-easing program boosted prices of sovereign securities across the region.

Yields on German securities with maturities up to eight years are below zero, while bonds from seven other countries in the currency bloc also have negative yields

Draghi said the “program is flexible enough to be adjusted if circumstances change,” although he ruled out lowering the deposit rate, a step which could make a broader range of debt eligible.

March data signaled that deflationary pressures are easing. Consumer prices dropped an annual 0.1 percent in March, compared with minus 0.3 percent in February, though that’s still the fourth consecutive reading below zero.

Giving more detail on how the ECB plans to respond to developments in inflation over the life of the program, Draghi said they’ll aim to strip out the impact of short-term effects, such as through swings in energy prices.

“The Governing Council will follow its monetary policy strategy and concentrate on trends in inflation,” Draghi said. The ECB intends to look “through unexpected outcomes in measured inflation in either direction if judged to be transient and to have no implication for the medium-term outlook for price stability.”