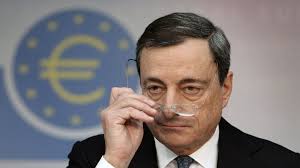 Mario Draghi said the European Central Bank’s expanded asset purchases will succeed in pushing inflation in the euro area back toward its goal.

“We can deploy and we will deploy monetary policy in a way that can and will stabilize inflation in line with our objective,” the ECB president said at a conference in Frankfurt, three days into his 1.1 trillion-euro ($1.2 trillion) bond-buying program. “Our monetary policy is certainly supporting the recovery.”

In his first public appearance since the start of quantitative easing, Draghi can point to falling yields on government debt and a slide in the euro as signs that the program to buy 60 billion euros a month of sovereign and private-sector debt is making a mark. What he can’t yet show is whether banks and companies will respond by putting the fresh cash to work in the real economy.

Draghi’s speech on Wednesday was followed by comments from Executive Board member Peter Praet, the ECB’s chief economist. He’s responsible for projections that QE will restore euro-area inflation to the ECB’s goal of just under 2 percent and help deliver the fastest economic growth in seven years.
Reputational Risk

“The signal that we wanted to give is that we don’t have an instrument vacuum,” Praet said. “For monetary dominance to prevail, there should be no ambiguity on the willingness and the ability of the central bank to use all the tools available to fulfill its mandate.”

One impact of QE so far has been to push more government bonds into negative yields. Governing Council member Ewald Nowotny said in an interview at the conference that the situation can’t last and yields should rise as inflation normalizes. Taking on foreseeable losses by buying negative-yielding debt carries reputational risk for central banks, he said.

“I don’t think one can assume that we will have a very long phase of negative yields if this program is successful,” the Austrian central-bank governor said, adding that inflation should start to normalize in the second half of this year. “If we should see that for a longer period of time we still have a large part of the market at negative yield, that’s something we have to think about.”
Improved Outlook

Euro-area inflation hasn’t been near the ECB’s goal since early 2012, and was minus 0.3 percent in February. Macroeconomic forecasts unveiled by Draghi after the March 5 monetary-policy meeting in Cyprus showed consumer prices flat this year, with average inflation of 1.5 percent next year and 1.8 percent in 2017.

The central bank lifted its outlook for growth in gross domestic product this year to 1.5 percent from 1 percent, for 2016 to 1.9 percent, and projected 2.1 percent in 2017. The economy hasn’t expanded faster than 2 percent since 2007.

Draghi and Praet said those projections are dependent on the full implementation of all ECB stimulus measures. QE is scheduled to run through September 2016 or until there is a “sustained adjustment” in the path of inflation. Weekly summaries of purchases will be published on the ECB’s website, with a more detailed breakdown released monthly.
No Shortage

That’ll give some insight into how willing bondholders are to sell. The rally in government debt this week that pushed Italian and Spanish 10-year yields to record lows and German five-year yields further below zero could prompt some investors to wait for further price gains before they sell.

Executive Board member Benoit Coeure, one of the architects of QE who is responsible for market operations at the ECB, said he doesn’t see supply as a problem, and that scarcity of bonds is not the same as a shortage.

“While the effective supply of eligible securities is undoubtedly lower than the total amount outstanding, I do believe that it will still be substantially higher than the amounts we intend to purchase,” he said in Frankfurt on Tuesday. “If this is the case, there will be a price at which we can buy the quantities needed to meet our monthly targets.”

Coeure said scarcity may materialize first and foremost in those market segments with a higher duration. National central banks will try to avoid buying specific securities such as current cheapest-to-deliver bonds underlying futures contracts, securities commanding “special” rates in the repo market as a sign of temporary scarcity, and other assets displaying significant liquidity shortages, he said.
Daily Targets

The ECB says its strategy for buying 60 billion euros a month of debt is to break the purchases down into daily targets listed on a spreadsheet that is sent to the national central banks. Those central banks will strive to meet the daily targets, with more flexibility on the final trading day of each month. At least three quotes are needed for each security, with the central bank buying at the cheapest price.

National central banks won’t buy government debt in the primary market, which would infringe a law against monetary financing, and will wait a number of days after a new issue before buying in the secondary market. The ECB hasn’t revealed the precise duration of that interval.