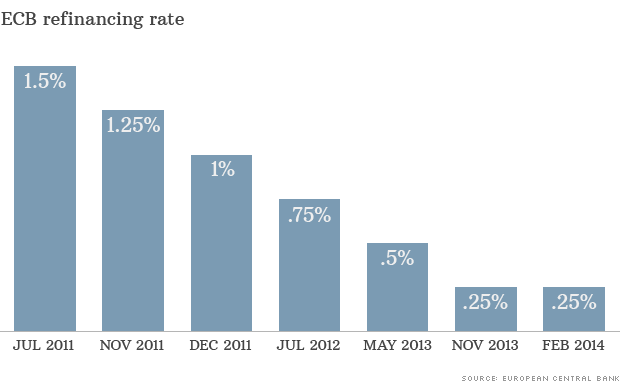 The European Central Bank kept interest rates on hold Thursday, despite growing concerns about the threat of deflation in the eurozone and the outlook for global growth.

The bank’s main refinancing rate was held at its record low of 0.25% for a third month running. President Mario Draghi will explain the bank’s decision at a news conference at 8.30 a.m. ET. Last month, he warned it was premature to declare victory in the eurozone crisis, and pledged to use all the tools at his disposal if necessary.

Economists were divided over whether the ECB would lower rates Thursday, with some arguing the bank was more likely to wait for updated growth and inflation forecasts in March.

But pressure has been building for the central bank to take action again to stimulate activity.

Inflation is slowing in the eurozone, raising the threat of a slide into deflation for an economy that is barely growing and still not generating jobs fast enough to bring down unemployment.

Consumer price inflation is less than half the central bank’s target. A slide into deflation could depress economic activity still further as spending is postponed in anticipation of lower prices. It would also raise the real value of the debt already weighing down on many eurozone countries.

The chances of a growth shock have also increased. Recent data from the U.S. and Europe has been mixed at best. This week saw a weak manufacturing number in the U.S., and eurozone retail sales fell in December.

Emerging markets have been shaken by hints of a slowdown in China, a reduced flow of cheap money from the Federal Reserve, and political unrest. Some have been forced to jack up interest rates to defend their currencies and tackle inflation, moves that could choke off growth and hit Europe’s export-led recovery.

Investors’ appetite for risk has also taken a beating, as reflected in the flight of cash from the more fragile emerging economies and global stock markets.

The turbulence has been seen in overnight interbank interest rates, raising fears that Europe’s banks may become even more cautious about lending to firms and households, particularly in weaker eurozone states.

Earlier on Thursday, the Bank of England left interest rates unchanged, as expected.

U.K. growth is accelerating, and unemployment falling, but Governor Mark Carney said last month he saw no need to raise rates because the economy was some way from achieving “escape velocity.”