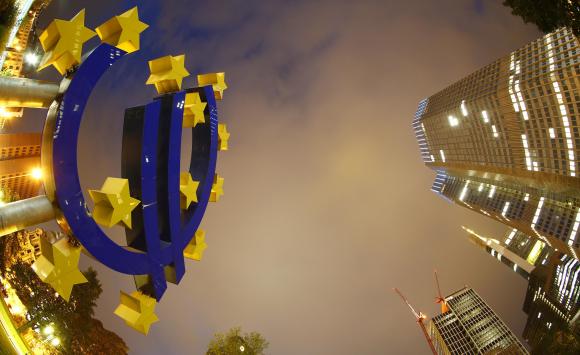 The European Central Bank left interest rates unchanged on Thursday, holding its nerve in the face of uncomfortably low inflation though it may unleash other measures to pep up a fragile euro zone recovery.

The decision to leave its main interest rate at 0.25 percent was generally expected by markets, though a third of economists polled by Reuters forecast a cut.

The ECB also left the deposit rate it pays banks for holding their money overnight at zero.

“This is no surprise,” RBS economist Richard Barwell said.

“There will be two messages: firstly, things are eventually going to get better and therefore we don’t need to act today. Secondly, if things get any worse in the near future, we absolutely will act.”

Attention now turns to ECB President Mario Draghi’s 1330 GMT (8:30 ET) news conference, at which he may yet announce a measure to loosen lending conditions.

With inflation running in the ECB’s “danger zone” below 1 percent – 0.8 percent at the last count – the bank has discussed ending operations to drain funds from the financial system, a back door way of increasing liquidity.

The ECB currently offsets money it put into the system through government bonds it bought at the height of the euro debt crisis by withdrawing an equivalent amount of funds from week to week.

Stopping this “sterilization” would effectively release around 175 billion euros ($240 billion) into the banking system.

Such a move would mark a big philosophical shift at the ECB by showing it is ready to increase the money supply – a step towards U.S.-style quantitative easing (QE), or buying assets to drive money into the system.

An ECB source predicted there would be unanimous agreement to end sterilization of bond purchases under the bank’s Securities Markets Programme (SMP).

The International Monetary Fund believes the ECB needs to do more than that.

Reza Moghadam, the head of the IMF’s European Department, said in a blog on Wednesday that the ECB should cut interest rates and pump out more money, perhaps through QE.

The Governing Council will, for the first time, publish staff forecasts stretching into 2016 at the news conference. Draghi described this as “a very significant change in our analysis” after the bank’s February 6 policy meeting.

Draghi has set out two scenarios that could trigger fresh action: a deterioration in the medium-term inflation outlook and an “unwarranted” tightening of short-term money markets.

Some analysts predict ending sterilization is only the start of the ECB’s long battle to fight off deflation risks, with a growing minority of economists polled by Reuters last week saying the bank may be forced to print money this year.

Despite insisting that the euro zone is not experiencing deflation, Draghi warned on Monday that inflation is “way below” the bank’s goal and if it stays so for too long, it will be harder to get it back up to the target.

Looming in the minds of policymakers are fears of Japan-style deflation, which became so entrenched companies and households held off on spending on expectations of lower prices ahead, leading to two decades of economic stagnation.

Like the Bank of Japan, which meets to set policy next week, the ECB is running out of room to cut interest rates.

Ending the SMP sterilization operations would lack the “wow” factor of quantitative easing but would show the ECB is being proactive and delivering on its pledge to keep an accommodative policy stance and take fresh action if needed. ($1 = 0.7278 euros)