The euro fell against most of its 16 major peers as investors sold peripheral government bonds amid speculation the European Central Bank may add further monetary stimulus. 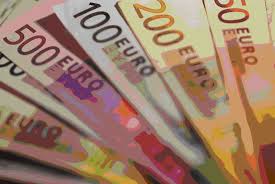 The 18-nation currency was set for the biggest two-week decline versus the dollar since March as Greek bonds fell after opinion polls suggesting its governing coalition is losing support and Portuguese securities declined as the country prepared to exit its financial bailout. India’s rupee rose as Sonia Gandhi conceded an election to Narendra Modi’s opposition bloc.

“The story is a bearish one for the euro,” Vassili Serebriakov, a New York-based foreign-exchange strategist at BNP Paribas SA, said by phone. “There’s scope to build up euro shorts. We see the market starting to position that way starting last week.” A short position is a bet that an asset will decline in value.

The euro was set for a 0.6 percent drop versus the yen and a 0.3 percent decline against the dollar this week.

Data yesterday showed euro-area gross domestic product rose 0.2 percent in the three months through March, half as much as economists forecast and matching growth in the fourth quarter.

The dollar-yen rate’s 120-day correlation with the gap between Treasury 10-year yields and their Japanese counterparts climbed to 0.57 on May 12, the highest since October 2010. The extra yield offered by U.S. government debt due in a decade over similar-maturity Japanese bonds fell to 1.90 percentage points yesterday, the least since Oct. 29.

“Falling U.S. yields and the potential for further negativity on the risk-appetite front may make for a heavy USD-JPY in the near term,” Emmanuel Ng, a strategist at Oversea-Chinese Banking Corp., wrote in an e-mailed note to clients today, referring to a potential decline in the dollar-yen exchange rate.
Economic Pace

The benchmark 10-year Treasury yield fell to 2.47 percent yesterday, the lowest since Oct. 30. It was little changed at 2.51 percent today.

Output at U.S. factories decreased 0.6 percent last month after a revised 0.9 percent gain in March, according to a Fed report yesterday. The median forecast in a ForexSQ News survey of economists was an unchanged reading. Data from the Labor Department showed consumer prices rose 0.3 percent over the same period, from a 0.2 percent gain the previous month.

Job creation is “crucial” to the process of economic recovery and small companies “are responsible for a large share” of new employment, Yellen said yesterday in Washington in the text of remarks prepared for a speech to owners of small companies and officials from the U.S. Small Business Administration.

Minutes of the Fed’s April 29-30 meeting, when policy makers decided to pare their monthly bond purchases to $45 billion, will be released next week.

The rupee appreciated 0.9 percent to 58.78 per dollar after touching 58.62, the strongest level since June, according to prices from local banks compiled by ForexSQ.