Euro Falls to one month Low on ECB Outlook

Yields on lower-rated euro zone bonds fell to record lows and the euro slid further on Friday as investors positioned for more monetary stimulus from the European Central Bank. 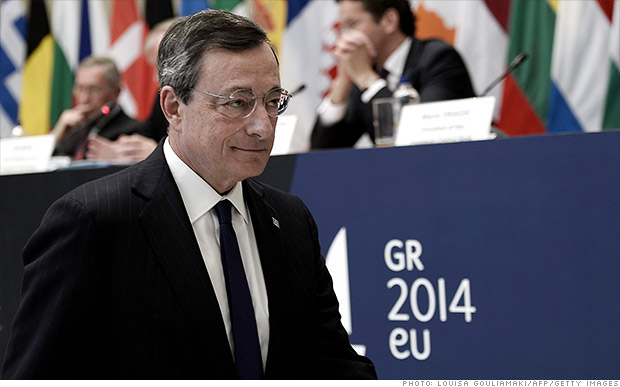 An upgrade by Standard & Poor’s of its credit-rating outlook for Portugal bolstered the positive sentiment as the country prepares to exit its international bailout this month.

Investors are betting the ECB will cut interest rates next month, opening the way for further possible steps, such as a bond-buying program. ECB President Mario Draghi said on Thursday the bank was ready to act in June if updated inflation forecasts merit it.

“With the words from Draghi yesterday, there is a good chance that peripheral yields continue to move lower in the next month or two,” said Stewart Richardson, a partner at macro hedge fund RMG Wealth Management.

“There has been quite an about-turn in thinking in the last 24 hours. We think the chances are much higher now that we get some sort of action from the ECB, and this is primarily done to bring down the euro.”

Richardson said the yield on Italy’s 10-year bond could fall to 2.75 percent. He has short positions on the euro against currencies such as the Japanese yen and the Norwegian krone.

Portugal’s 10-year bonds yielded as little as 3.44 percent on Friday, their lowest since early 2006, after S&P lifted the country’s credit outlook to stable from negative. Peak yields reached 17 percent at the height of the euro zone debt crisis.

Some market participants are becoming cautious after the rapid fall in yields.

“In the European periphery, we remain invested in Portuguese and Slovenian government bonds,” said Scott Thiel, head of European Global Bonds at Blackrock. “However, given their significant spread compression to German Bund yields in recent weeks and in light of excessive market expectations for imminent quantitative easing in the euro zone, we have reduced these positions.”

Global shares paused for a breather, with the MSCI All-Country World index .MIWD00000PUS down 0.2 percent after rallying to its highest level since December 2007 on Thursday.

Markets were also keeping a wary eye on the Ukraine crisis.

Russian President Vladimir praised the Soviet Union’s role in defeating fascism on Friday, the anniversary of the World War Two victory over Nazi Germany – a reminder that he has called leaders in Ukraine fascists.

Brent crude futures were up about 0.5 percent to $108.61 a barrel, supported by tension in Ukraine and limited supply from Libya, where a recent deal to reopen oil export terminals seemed unlikely to go ahead.

London nickel prices surged beyond $20,000 per tonne for the first time in more than two years on Friday, rocketing almost 6 percent at one point as a flurry of supply concerns fuelled heavy buying of the stainless steel material.

Spot gold edged 0.2 percent higher at $1,292.16 an ounce but still on track for its second straight weekly decline.