Fed will keep rates low even after economy improves 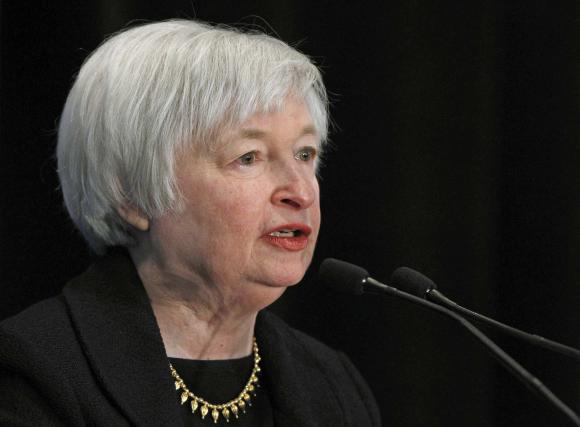 The Federal Reserve on Wednesday said it could keep interest rates unusually low even after the U.S. job market returns to full strength and inflation rises to the central bank’s target.

In announcing its view on future rates after a two-day policy meeting, it also dropped a set of guideposts it was using to help the public anticipate when it would finally start bumping overnight borrowing costs up from zero.

It said, however, that dropping a promise to hold rates steady “well past the time” the U.S. unemployment rate falls below 6.5 percent did not indicate any change in its policy intentions. Rather than relying on unemployment and inflation thresholds to guide expectations, it said would lean on a wide range of economic indicators in making its decision.

But what stood out in the central bank’s statement was its embrace of easy money policies even after the Fed achieves its goals of full employment and 2 percent inflation.

“Economic conditions may, for some time, warrant keeping the target federal funds rate below levels the committee views as normal in the longer run,” the Fed’s policy panel said after its first meeting chaired by Janet Yellen.

Yellen, who took the helm of the central bank on February 1, is set to hold a news conference at 2:30 p.m..

U.S. stock prices fell after the statement was released, while yields on U.S. government debt rose.

The central bank also proceeded with its well-telegraphed reductions to its massive bond-buying stimulus, announcing it would cut its monthly purchases of U.S. Treasuries and mortgage-backed securities to $55 billion from $65 billion.

Minneapolis Fed President Narayana Kocherlakota dissented, saying that dropping the threshold could hurt the credibility of the Fed’s commitment to return inflation to 2 percent.

The decision to continue to scale back its stimulus keeps the Fed on track for the measured wind down laid out by Yellen’s predecessor, Ben Bernanke. The Fed repeated that it plans to continue trimming the asset purchases in “measured steps” as long as labor conditions continue to improve and inflation shows signs of rising back toward the Fed’s 2-percent goal.

The Fed’s assessment of the U.S. economy chalked up recent weakness to adverse weather.

The Fed had said since December 2012 that it would not consider raising short-term rates until the jobless rate dropped to at least 6.5 percent, as long as inflation looked set to remain contained.

But the unemployment rate has fallen faster than anticipated, in part because of discouraged job hunters giving up the search, and officials think the economy is still far from ready for higher borrowing costs.

Of the Fed’s 16 policymakers, only one believes it will be appropriate to raise rates this year; 13 expect a first rate hike next year, and 2 others see the first rate hike coming in 2016, according to fresh forecasts published on Wednesday. But once rate hikes start, Fed officials see slightly sharper increases than they did in December, with rates ending 2015 at 1 percent and ending 2016 at 2.25 percent, according to the median of forecasts.

In December, Fed officials expected short-term rates to be just 1.75 percent by the end of 2016.

The Fed has kept overnight rates near zero since December 2008 and has bought more than $3 trillion in long-term debt to keep borrowing costs down and spur investment and hiring.

It began to scale back its stimulus in December, announcing it would trim its monthly bond purchases by $10 billion, after it saw the economy pick up speed in the fall. In January, the Fed said it would cut the purchases by a further $10 billion.

At the same time, it has sought to tamp down any market expectations that rate rises will soon follow with its so-called forward guidance. But as the actual jobless rate neared the threshold, officials began to seek a more durable way to telegraph their view on when they will tighten monetary policy.

They want to keep market expectations aligned with their own forecasts. If traders start to price in earlier rate hikes, the result would be tighter financial conditions that could deter the very investment and hiring that the Fed wants to promote.

Many Fed officials, including Yellen, have said recent weakness in economic data, from jobs and retail sales to industrial production and home building, appears largely due to the unusually harsh winter and should soon dissipate.