Greece agrees with Eurozone for another four month 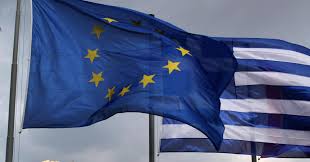 The agreement removes the immediate risk of Greece running out of money next month and possibly being forced out of the single currency area.

It also provides a breathing space for the new leftist-led Athens government to try to negotiate longer-term debt relief with its official creditors.

Germany, Greece’s biggest creditor, had demanded ‘significant improvements’ in reform commitments by Athens before it would accept an extension of eurozone funding.

Eurozone officials said the accord requires Greece to submit a letter by Monday listing all the policy measures it plans to take during the remainder of the bailout period, to ensure they comply with conditions.

Officials said an outline deal was reached in preparatory talks involving the Greek and German finance ministers, as well as the managing director of the IMF.

It was then agreed by the full 19-member Eurogroup, ending weeks of uncertainty.


European finance ministers announced earlier this afternoon that they had drafted a common text with Greece that could form the basis for an agreement to extend Athens’ bailout package – but at the time officials stressed that there was as yet no formal agreement.

The finance ministers were holding a third round of talks in just 10 days on the Greek debt crisis, after lead lender Germany rejected the latest proposals from Athens as a ‘Trojan horse’ designed to allow it to dodge its commitments.

With the €240bn (£178bn) bailout EU/IMF bailout program due to expire in little more than a week, Prime Minister Alexis Tsipras had voiced confidence in an eventual agreement

A Greek government official said earlier this afternoon: ‘There is an initial agreement on a joint draft text among the institutional partners, which is now being presented to all of the ministers.

‘Details may be defined later. But let’s see.’

The make-or-break talks meant Greece could leave the EU – but as no country has ever left it before there is no formal exit process.

On Monday night, Greece rejected a plan to extend its bailout, describing it as ‘absurd’.

Greece was likely to run out of money by March if a deal was not reached before the end of February.

German Chancellor Angela Merkel, speaking after talks in Paris, said all EU partners wanted to keep Greece in the euro but added: ‘There is a need for significant improvements in the substance of what is being discussed so that we can vote on it in the German Bundestag, for example next week.’

Finance ministers arriving from other eurozone states insisted on more guarantees for creditors that Greece will fulfil the bailout’s strict conditions on budget discipline and economic reforms.

Athens is determined to loosen austerity in order to revive its economy.

The European Central Bank and International Monetary Fund are also involved in negotiations as they are also creditors.

Greek Prime Minister Alexis Tsipras has dropped key demands made by his Syriza party in its successful election campaign, agreeing to honour debt obligations and accept continued supervision from bailout lenders and the European Central Bank.

He previously said he was certain eurozone finance ministers would accept Athens’ request for an extended loan.

A report by German magazine Der Spiegel claimed that the European Central Bank was making contingency plans for a possible Greek exit from the currency area if the talks fail.

Mr Tsipras last night spoke by phone with French President Francois Hollande and German Chancellor Angela Merkel, after a German representative at the talks was quoted as saying the Greek offer ‘rather represents a Trojan horse, intending to get bridge financing and in substance putting an end to the current programme’.

Eurozone officials had said Greece’s track record and the combative behaviour of its new leaders have undermined their confidence in whether Athens will deliver what it agrees to in talks with the other countries sharing the euro.

‘Unfortunately the changing rhetoric of the Greek authorities has created a certain erosion of trust, so we must build this once again at this Eurogroup meeting and we are hopeful a solution can be found based on the current programme,’ European Commission Vice-President Valdis Dombrovskis said.

Some pointed comments were directed at Varoufakis, an outspoken Marxist economist and blogger, and his casual style.

‘Even hardliners like us have to give the benefit of the doubt to a communist in a Burberry scarf,’ an official of one country joked.

Adding to pressure to reach a deal, Greek savers have withdrawn their money from the banks at an accelerating pace despite government assurances that there is no plan to introduce capital controls to stem the outflows.

Deposit outflows rose to a total of over one billion euros in the past two days, some of the highest daily levels seen this year, three senior banking sources told Reuters.

Greeks are nervous before a three-day weekend, given memories of capital controls imposed in Cyprus in 2013 over a long weekend, a senior banker said. Monday is a public holiday in Greece.

Tsipras, elected last month on a platform of scrapping the bailout, says austerity has strangled his country’s economy and caused a humanitarian crisis.

Merkel has in the past agreed financial rescues only at the very last moment when she could tell Germans the future of the euro zone was at risk.

Berlin is Greece’s biggest creditor, owed 50 billion euros as its share of the EU/IMF bailouts. As Europe’s biggest economy, it would take a hit in the turmoil that might ensue if Greece defaulted and left the euro area.

However, whether for tactical reasons or out of deep exasperation with Athens, Germany has conveyed the message that a Greek exit, while not desirable, would be manageable.


Earlier on today Chancellor George Osborne warned the ongoing stand-off in the eurozone over Greece’s debts poses a risk to Britain’s economic stability.

Mr Osborne said that the eurozone countries must find ‘a common solution’ to ward off a full-blown crisis.

The Chancellor told Sky News: ‘What you see now in this stand-off between the eurozone and Greece is the risk of a full-blown crisis which would do real damage to the European economy and is a risk to Britain.

‘We need the eurozone to find a common solution and here at home we need to go on working through our economic plan, which has kept us safe.’

Former chancellor Lord Lamont said the austerity measures forced on Greece had been ‘completely counter-productive’ and a compromise needed to be found.

He said: ‘This is a very serious situation, not just for the eurozone but for Britain too. There needs to be a compromise and more give from Germany.

‘The original Greek austerity measures have been completely counter-productive and unsuccessful and need to be completely renegotiated.’


Meanwhile the London market took a tentative step towards a new record high today as talks continued over the future of Greece in the euro.

The FTSE 100 Index was 20.7 points higher at 6909.6, even after Germany criticised Athens’ latest proposals.

The pound suffered a disappointing session after rising sharply on Wednesday amid signs that an interest rate hike may be closer than many analysts had been expecting.

It was flat against the euro and slightly lower versus the US dollar, even though retail sales figures for January were slightly better than expected at 0.3 per cent lower.

There was also a boost for the Government after it emerged that public sector finances – excluding the effect of bank bail-outs – were in surplus by £8.8 billion in January, up £2.3 billion from the surplus in the same month last year.

Borrowing for the fiscal year starting in April 2014 is now £74 billion, 7.5 per cent lower than the same period last year and better than the annual fall in the deficit forecast by the independent Office for Budget Responsibility (OBR).