The Importance Of The Purchasing Managers’ Index PMI 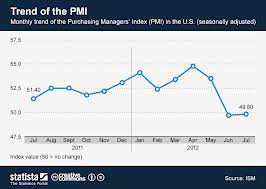 One of the most reliable leading indicators for assessing the state of the U.S. economy is the PMI, formerly known as the Purchasing Managers’ Index.

PMI is the headline indicator in the ISM Manufacturing “Report on Business,” an influential monthly survey of purchasing and supply executives across the United States. The acronym PMI stood for Purchasing Managers’ Index prior to September 1, 2001. But since that date, the Institute for Supply Management (ISM) has used PMI as a stand-alone acronym to reflect its corporate name change (the ISM was called the National Association of Purchasing Management – NAPM – until January 2, 2002) and broader reach into strategic supply management beyond just the purchasing function.

The ISM Manufacturing “Report on Business” and the PMI number is closely watched by investors, business and financial professionals.

The PMI is based on responses from members of the ISM Business Survey Committee, which includes a range of industries diversified by the North American Industry Classification System (NAICS) and based on each industry’s contribution to U.S. GDP. The survey covers 18 industries that include every aspect of the manufacturing sector.

Members receive a monthly questionnaire that asks them to identify month-over-month changes for the following ten business activities that also constitute individual indexes in the Report on Business survey:

The surveys are sent out to Business Survey Committee respondents in the first part of each month, and respondents are asked to report information only for the current month. Most survey respondents wait until late in the month to respond to the survey in order to portray the clearest picture of current business activity. The ISM collates the data and compiles the report for release on the first business day of the following month.

Calculation of the PMI

The PMI is a composite index based on equal weights (20%) of the following five primary sub-indexes – New Orders, Production, Employment, Supplier Deliveries, and Inventories.

Seasonal adjustments, which are developed by the U.S. Department of Commerce and provided to ISM, are made each year in the January reports to four of the five sub-indexes (Inventories being the exception). These seasonal adjustments are made to adjust for the effects of recurring intra-year deviations due to normal differences in weather conditions, holidays etc.

All ISM indexes are diffusion indexes, which measure the extent to which a change is dispersed or diffused in a group. For each of the 10 business activities, survey respondents are asked to indicate whether it has become better, worse, or has stayed the same, as compared to the previous month. The individual indexes for each business activity such as production, employment etc. are calculated by taking the percentage of respondents who report that the activity has improved (i.e. is higher or better) and adding it to one-half of the percentage who report unchanged activity.

Interpretation of the PMI

A PMI reading over 50 or 50% indicates growth or expansion of the U.S. manufacturing sector as compared to the previous month, while a reading under 50 suggests contraction. A reading at 50 indicates that the number of manufacturers reporting better business is equal to those stating business is worse.

Another key number to watch is 42.2%, since a PMI index above this level over a period of time indicates an expansion of the overall economy. The November 2013 PMI reading of 57.3 indicates that the U.S. economy expanded for the 54th consecutive month, as the PMI first surpassed the 42.2 level in that expansion in June 2009, which coincidentally also marked the start of the post-credit crisis U.S. recovery as determined by the National Bureau of Economic Research. The November 2013 PMI figure also indicated that the U.S. manufacturing sector had grown for the sixth successive month.

In its press release detailing the November 2013 PMI, the ISM noted that based on the historical relationship between the PMI and the overall economy, the average PMI level of 53.7% in the first 11 months of 2013 corresponded to a 3.6% increase in real U.S. GDP on an annualized basis, which was significantly higher than economists’ prevailing consensus growth forecast for the U.S.

Pros and Cons of the PMI

How To Use The PMI

The PMI is an important leading indicator that can move financial markets. However, if the latest index reading suggests an unexpected turnaround in the economy – for better or worse – it may be best to wait until other indicators also confirm the economy’s turnaround, rather than making wholesale portfolio changes on the basis of a single reading.

The following points should be borne in mind with regard to the PMI:

The PMI is an important leading indicator that provides valuable insights into the state of the U.S. economy in general and the manufacturing sector in particular. While it tends to be occasionally overlooked, new investors should familiarize themselves with this key economic indicator.

This article wrote by  Fxstay for www.topforexbrokers.com