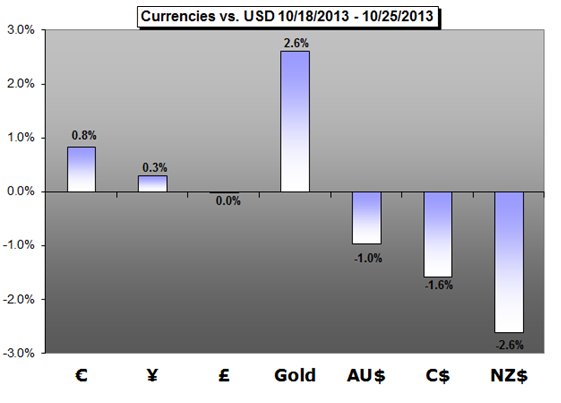 Economic data releases are essential for a foreign exchange trader. These important economic indicators create volatility, and plenty of speculation is always surrounding them, and The United States’ gross domestic product (GDP) is one such report. Not only do forex (FX) traders continue to monitor this important piece of economic data, they use it to either establish a new position or support a current one.

What Goes into the GDP Report
Gross domestic product is simply the total market value of all goods and services produced in a particular country. In the case of the United States, this total can be broken down into four main categories: consumption, investment, government expenditures (or spending) and net exports.

The sum of these numbers is the United States’ total gross domestic product, which can be compared to another year’s performance in order to derive a percentage of GDP growth or contraction in a particular period.

Making the Comparison
Gross domestic product figures can be released on a monthly or quarterly basis. For the United States, the Bureau of Economic Analysis (BEA), a branch of the U.S. Commerce Department, releases final quarterly domestic figures – along with additional advanced or preliminary figures toward the end of each month. This report can also be released in either real or nominal conditions, the former being adjusted for the effects of inflation. The BEA also releases its GDP price index that has been used in competition with both consumer price index (CPI) and the personal consumption expenditures deflator as a gauge of consumer inflation.

Trading the Foreign Exchange Markets
Like any other piece of important economic data, the gross domestic product report holds a lot of weight for currency traders. It serves as evidence of growth in a productive economy, while signaling contraction in a withering one. As a result, currency traders will tend to seek higher rates of GDP or growth in a belief that interest rates will follow the same direction. If an economy is experiencing a good rate of growth, the benefits will trickle down to the consumer – increasing the likelihood of spending and expansion. In turn, higher spending leads to rising prices, which central banks attempt to tame through interest rate hikes.

For example, a final reading of 1.5% growth compared to an earlier advanced release of 3.5% is worse off when compared to a similar 1.5% print in both advanced and final readings. A positive growth figure is always good for the economy, but not when a final GDP figure dips below the advanced reading.

What Investors Can Expect
There are three basic reactions to price action that a trader or investor can expect:

1. A lower-than-expected GDP reading will likely result in a selloff of the domestic currency relative to other currencies. In the case of the U.S., a lower GDP figure would signal an economic contraction and hurt the chances of a rise in U.S. interest rates – lowering the value or attractiveness of U.S. dollar based assets. Additionally, the further below an actual GDP reading is from the estimate, the sharper the decline in the dollar.

2. An expected reading requires a bit more comparison by the FX investor. Here, the analyst or trader will want to compare the current reading to the previous quarter’s reading – maybe even the previous year’s reading. This way, a better evaluation of the situation can be gathered. Given this factor, you can expect that the resulting price action will tend to be mixed as the market sorts out the details.

3. A higher-than-expected reading will tend to strengthen the underlying currency versus other currencies. Therefore, a higher U.S. GDP figure will benefit the greenback, lending to some appreciation in the U.S. dollar against counter currencies; the higher an actual GDP reading is, the sharper the incline of the dollar’s appreciation.

Putting It All Together
So, let’s take a quick look at a recent example:

In Figure 1, the EUR/USD currency pair fell from the 1.4200 big figure over the past couple of sessions (far right handside of the chart) to establish support just below 1.4050 in the 60-minute time frame. Observe how the euro appreciated by about 50 pips, immediately following the March 28, 2011, release at 8:30 a.m. At that time, it was revealed that the world’s largest economy grew by less than what was expected. Instead of rising by an estimated 1.9%, the U.S. grew by an advance figure of only 1.8%. This was also less than the 3.1% from the previous quarter – a visual slowdown in growth. As a result, traders sided with selling a weaker U.S. dollar, helping the euro to retrace its losses and climb even higher through the 1.4200 resistance barrier.

A currency trader looking to take advantage of this opportunity could easily place a buy entry near the support level – adding a relatively narrow stop order of 30-40 pips for risk management sake.

The Bottom Line
The U.S. gross domestic product report is (and always will be) an important release to consider when it comes to trading the foreign exchange markets. And, it’s the traders that understand how to interpret the data and apply its relevance to a particular trade that come out on top.