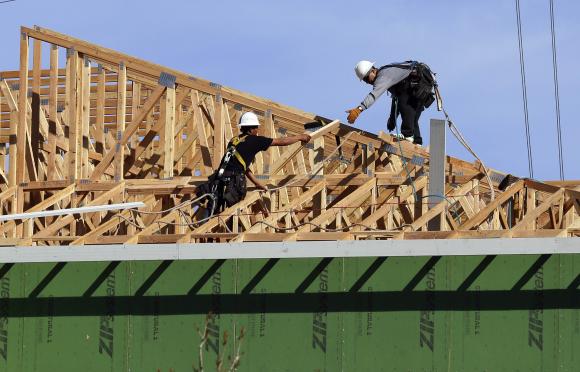 U.S. housing starts rose less than expected in March and building permits fell, pointing to underlying weakness in the housing market that could persist despite better weather.

The Commerce Department said on Wednesday groundbreaking increased 2.8 percent to a seasonally adjusted annual rate of 946,000.

February’s starts were revised to show a 1.9 percent rise rather than the previously reported 0.2 percent fall. Economists polled by Reuters had expected starts to rise to a 973,000-unit rate last month.

While a brutally cold winter weighed on home building in December and January, activity has also been hampered by shortages of building lots and skilled labor as well as rising prices for materials.

A report on Tuesday showed homebuilders in April were still downbeat about the sector’s near-term prospects. The housing market is under strain from higher mortgage rates and elevated house prices that are sidelining potential buyers.

Groundbreaking for single-family homes, the largest segment of the market, surged 6.0 percent to a 635,000-unit pace last month. Starts for the volatile multi-family homes segment fell 3.1 percent to a 311,000-unit rate.

That was the lowest level since last October.

Permits to build homes fell 2.4 percent in March to a 990,000-unit pace. Permits for single-family homes rose 0.5 percent but fell 6.4 percent for the multi-family sector.

This article wrote by: Fxstay