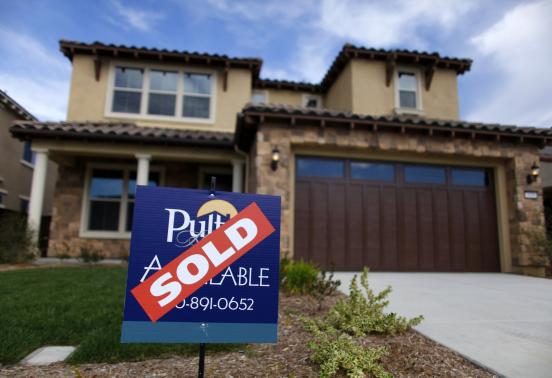 Sales of new U.S. single-family homes surged to a 5-1/2-year high in January, possibly easing concerns of a sharp slowdown in the housing market.

The Commerce Department said on Wednesday that sales jumped 9.6 percent to a seasonally adjusted annual rate of 468,000 units, the highest level since July 2008.

December’s sales were revised up to a 427,000-unit pace from the previously reported 414,000-unit rate. Economists polled by Reuters had forecast new home sales, which are measured when contracts are signed, falling to a 400,000-unit pace in January.

Sales in the Northeast soared 73.7 percent to a seven-month high, while the South recorded a 10.4 percent rise in transactions to a more than five-year high.

New homes are a small segment of the housing market, which lost momentum in the second half of last year following a run-up in mortgage rates and a shortage of properties for sale.

Higher borrowing costs and home prices mean that properties are less affordable for many, especially as income growth remains tepid.

Yields on 10-year and 30-year Treasuries rose after the release of the housing data, while U.S. stocks were trading broadly higher.

A separate report on Wednesday showed applications for loans to purchase homes fell 4 percent last week from a week earlier, hitting their lowest level since 1995.

Sales of previously-owned homes tumbled to a 1-1/2 year low in January and housing starts recorded their biggest decline in nearly three years last month, according to data last week.

That raised concerns that the sector, which is key to the economy’s recovery, was slowing down sharply.

Last month, the supply of new houses on the market was unchanged at 184,000 units.

New house inventories are likely to remain lean for a while as builders complain about a lack of lots, materials and skilled labor. With household formation falling sharply last year, housing activity could remain constrained for a while.

The median price of a new home last month rose 3.4 percent to $260,100 from January 2013. The pace of price increases, however, has slowed in recent months.

At January’s sales pace it would take 4.7 months to clear the supply of houses on the market. That was the fewest months since June and was down from 5.2 months in December.

A supply of 6.0 months is normally considered a healthy balance between supply and demand.