Janet Yellen’s effort to provide clarity on the outlook for the Federal Reserve’s main interest rate by publishing policy makers’ forecasts is instead creating confusion. 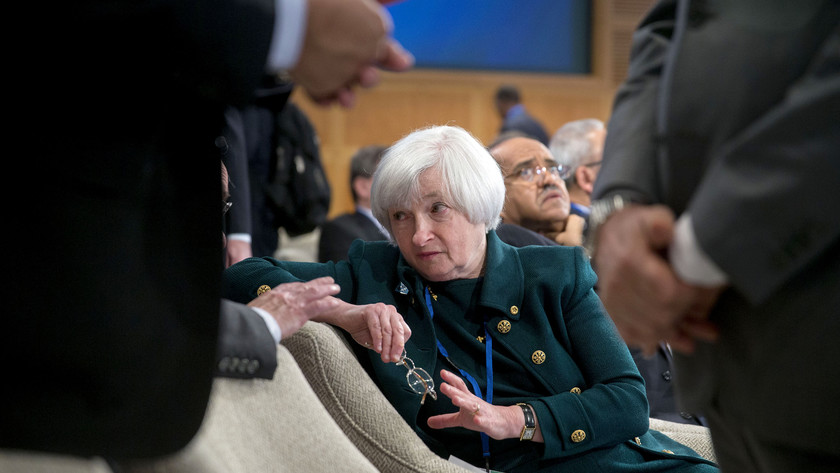 Explaining the Fed’s intentions will be crucial as an improving economy brings it closer to raising the rate for the first time since 2006. Further mixed signals risk a surge in bond-market volatility as policy makers begin what will be “an extraordinarily complicated tightening cycle,” said Drew Matus, a former markets analyst at the Federal Reserve Bank of New York.

“The Fed’s communications challenges have gotten worse over time as they’ve tried to become more transparent,” said Matus, New York-based deputy chief U.S. economist at UBS AG. “There’s a problem with being transparent but not being clear, and the Fed has been remarkably unclear.”

Fed officials, who begin a two-day meeting today, must sharpen their message, Atlanta Fed President Dennis Lockhart said on April 16. The Fed on June 18 will release a new set of projections for the federal funds rate, or the price of overnight loans among banks, along with forecasts for growth, employment and inflation.

“We have to keep working on the quality of our communications,” Lockhart told reporters in Stone Mountain, Georgia. The rate forecasts are one area “we should give attention to.”

For more than a year before last month, the Fed’s intentions were crystal-clear: It vowed to keep its key rate near zero at least as long as unemployment exceeded 6.5 percent and the outlook for inflation was no more than 2.5 percent.

The Federal Open Market Committee dropped that pledge at its March 18-19 meeting after unemployment fell to 6.7 percent, even as other labor-market gauges continued to show weakness. Instead, the FOMC said it would consider a “wide range of information” on jobs, consumer prices and financial markets in deciding how long to keep the fed funds rate near zero, where it has been since December 2008.

With no unemployment threshold, investors latched onto the closest thing to numerical guidance: the forecasts for the fed funds rate.

“If you don’t have a hard and fast quantitative threshold, then you’re going to be looking at the projections more carefully,” said Mark Zandi, chief economist at Moody’s Analytics Inc. in West Chester, Pennsylvania.

The quarterly projections were first released in 2012 on the recommendation of a Fed subcommittee headed by Yellen, who was vice chairman at the time. They are displayed as a series of dots on a chart, with each dot representing an unnamed official.

Yellen, at her first press conference as chair on March 19, warned against paying too much attention to these forecasts.

“One should not look to the dot-plot, so to speak, as the primary way in which the committee wants to or is speaking about policies to the public at large,” Yellen said.

One drawback: the dots are individual forecasts, while the statement represents the consensus of the committee.

“It’s the committee’s consensus that should be taken as the actual policy,” former Fed Chairman Ben S. Bernanke said in response to questions after an April 22 speech in Toronto.

Another source of confusion: the dots don’t distinguish between voting and non-voting members of the FOMC. Members of the seven-person Board of Governors have permanent votes along with the president of the New York Fed, while the other 11 regional reserve bank presidents rotate, with four voting each year.

Lockhart advocates specifying which forecasts are made by voting members. He also says the Fed should explain how the forecasts mesh with its post-meeting statement, which last month said the decision to drop the unemployment threshold for the federal funds rate didn’t represent a change in policy intentions.

The set of forecasts issued in March presented “a real communication issue because it seemed to be inconsistent with the underlying decision of the committee and the underlying guidance,” Lockhart said April 16. “Clearly, some way of coordinating that so there is consistency would be preferable to what happened recently.”

Fed officials have long been dissatisfied with the dots. Within months of their first release in 2012, officials were already discussing “enhancing the clarity and transparency” of the projections, according to minutes of their June 2012 gathering.

Officials are unlikely to support identifying each dot because investors perceive that only the chair’s is relevant, according to Michael Gapen, senior U.S. economist at Barclays Plc in New York.

“I’d be looking for which dot is Yellen and that’s the one I would care about — that’s what an investor would tell you,” said Gapen, a former member of the Fed board’s Division of Monetary Affairs. “There’s really only one that matters.”

Identifying which forecasts come from governors and presidents also isn’t likely to win support because “you still would be taking a whole set of dots and making them less important,” Gapen said.

Difficulties aside, the dots are useful for investors seeking insight into the Fed’s intentions, said Laura Rosner, a U.S. economist at BNP Paribas SA in New York and a former researcher at the New York Fed.

“It provides more information and more open communications,” Rosner said. While the forecasts may sometimes clash with the statement, “overall it’s a step in the right direction.”

“If you didn’t have the dots, you probably would have missed the fact that the committee as a whole is a bit more confident on the economic outlook,” said Perli, a partner at Cornerstone Macro LP in Washington. “That’s good information to have.”

The importance of the projections will only grow as the Fed nears the end of its bond-buying program, prompting investors to focus more on the timing of a rate increase, said Stephen Stanley, chief economist at Pierpont Securities LLC in Stamford, Connecticut, and former Richmond Fed researcher.

At its March meeting, the FOMC decided to reduce monthly bond purchases by $10 billion, to $55 billion, and said it would continue to cut them in “measured steps.”

“The dots are going to take on more significance,” Stanley said. “They’re going to be the main qualitative guidance that the Fed gives.”